skip to main | skip to sidebar

All in a Days Work 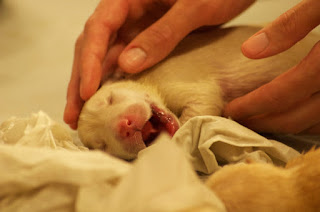 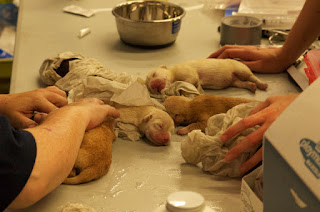 When I first arrived at the temporary shelter, a box of puppies was put on the table. We were told by the vet we needed to lower their body temperatures before we did anything else or these little 2 day old babies would die. When Animal Control went to seize the dogs, the woman lied to them and said she had gotten rid of half the dogs. In truth, she moved the adults to a different property and grabbed several litters of puppies, placed them in a box and put them in a car. A CAR. A car with no windows open, no air conditioning, no air at all for these puppies. Today, the temperature was over 90 and the inside of that car was easily over 150 degrees. Those pups for a lack of a better term were cooking. We wet paper towels with cold water and washed them down. We'd put our pinkies in their mouths to keep their suckling action strong. The heat emanating from their bodies was unreal. We did everything we could before they took them to an emergency vet hospital. They all came back hours later hydrated and reunited with their moms. Sadly, I learned this morning that we lost one of them overnight. I'm just grateful the rest of them were strong enough to pull through. 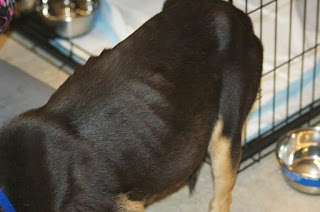 We saw some emaciated dogs. Dogs that looked like they hadn't eaten in weeks. Sadly the one who looked the worst was a pregnant mother. Of course the woman responsible for these dogs said she had tumors and wasn't pregnant. Right, and I can pull money out of my ear. This is a woman who housed these dogs in filth so nasty, the Animal Control folks had to go into the house in HAZMAT suits. This same woman is a cook in a cafeteria. Yes, she serves food at her job to some company's employees. I truly hope they are notified, Lord knows what kinds of diseases she has spread to them. 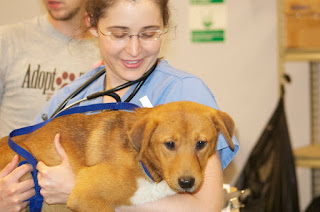 I have to give major credit to Pet Smart for donating 90 carriers, 90 crates and 4 pallets of food to the temporary shelter. It's always nice to see the community giving back to each other in times of need. The Humane Society are people who truly care about the welfare of animals. You could see such caring coming from their staff, the volunteers and the amazing vets who gave their time freely to give these dogs the first medical treatment of their lives. We had vets come up from Louisville, Kentucky just to help with these dogs. Incredible outpouring! This is the job all of these folks do everyday to make sure dogs and cats get a second chance at life. 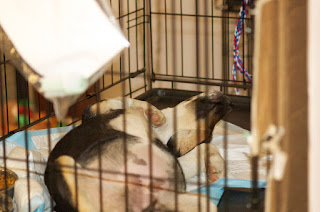 There were many highlights as well. Several of the dogs were incredibly sweet. There was a big Chow about 2 years old that just melted my heart. He was so big and furry that I named him Sully. He gave so many kisses even though he was so hungry. He was given a big bowl of food and a hot dog or two which made him much happier. Another sweetheart was a Beagle puppy about 7 months old. She was so afraid in the beginning, but after having a clean crate, a big bowl of food and water that soon she was snoring on her back with legs sprawled wide open. She was a very happy camper. Finally, the last part of my day was holding a 6 week old puppy. This litter of 3 were so damn cute it nearly took all of the pain away from earlier. Their cage was being cleaned out so we were able to hold them for awhile. Having that tiny girl lick my face with that amazing puppy breath really helped to fill my hope tank for these little guys. There are a number of shelters that have laid claim to many of these dogs already. This was truly the beginning of their new lives. 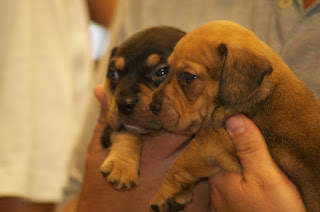 Please go to your neighborhood shelters before buying a dog. There are so many who just want to be loved. Shelter dogs are the BEST dogs. They aren't bad because they don't have papers, they just more than likely had bad owners. As for the woman who denied these dogs a proper home and life, I know there is a special place in Hell waiting for her. She deserves no less.
Posted by Di Bauden at 4:47 PM No comments:

The Skies Have It by Di Bauden is licensed under a Creative Commons Attribution-NoDerivs 3.0 Unported License.
Based on a work at www.theskieshaveit.info.

Why A Photo Blog?

Di Bauden
I love to take pictures. I never realized how gorgeous the sky was until I looked up one day. The moon has become somewhat of an obsession for me as well. Nature in general is incredibly beautifull. I've also become a beekeeper and will be documenting my first year with owning my first colony of bees. So here we go. Enjoy! All of the images belong to me, so please ask permission before using. Di Bauden